Time Has Arrived For Time Variant Pricing, But What Kind?

This is a sample article from the July 2011 issue of EEnergy Informer.

Smart meters remove the obstacle to implementation of dynamic pricing, hence the debate on what kind.

It is not infrequent that one sets off in pursuit of a sensible goal, but forgets to change course when the goal become irrelevant. Few years ago, it was announced that a government agency founded in Italy to look after the orphans after the Second World War was finally abolished. The youngest orphans were now 60 years old or older, many were grandparents. Clearly time had arrived to close shop.

After California’s 2000-01 electricity crisis, the state’s grid operator as well as regulatory and energy policy agencies became obsessed with resource adequacy — having enough capacity to meet demand and avoid rolling blackouts, sharp price spikes and unwarranted price volatility, and constant threat of power shortages, especially during California’s hot summer months. There was also renewed interest in energy efficiency and demand response, to address the same problems and as a cushion against price volatility in the wholesale market. Under these circumstances, it made perfect sense to introduce dynamic or time-variable pricing — identified among many reasons leading to the runaway wholesale prices during the crisis. Had retail consumers been exposed to high wholesale prices, some experts argued, the worst of the outrageous price spikes could/would have been avoided. Customers with discretionary loads would surely cut back consumption rather than pay astronomical prices — had they been exposed to real-time prices. 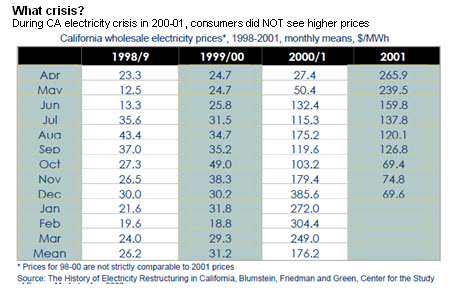 Regulators at the California Public Utilities Commission (CPUC) became supportive of massive rollout of smart meters as the enabling technology that allows the introduction of Dynamic pricing (DP), which comes in many varieties including critical peak pricing (CPP). 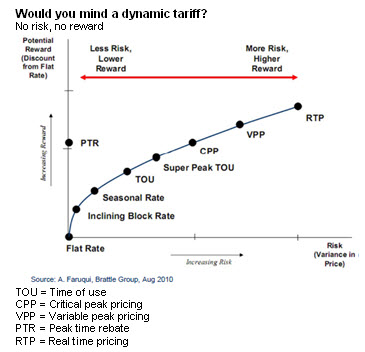 The CPUC went even further, deciding that DP should be the default tariff for all small and commercial customers. For those not familiar with the term, default tariff means that customers would automatically be placed on DP unless they specifically request to be put on a different tariff, referred to as “opting-out,” in industry parlance.

But times have changed since 2000-01 crisis. The state is no longer short of capacity, and the market operator, California Independent System Operator (CAISO) is no longer worried about making it through the summer with sufficient reserves. Moreover, with ample capacity and the sluggish economy, wholesale prices in CAISO have seldom exceeded 10 cents/kWh since 2009 — which is considerably lower than 50-120 cents/kWh embedded in CPP rates used by California’s three investor-owned utilities. The critics of CPP point out that there is no justification for sharp prices in CPP if wholesale prices rarely, if ever, rise to very high levels. Who can disagree?

Moreover, the state’s priorities have changed rather dramatically. Resource adequacy, a pressing issue in the aftermath of 2000-01 electricity crisis is no longer a priority. Instead, California’s energy policy today revolves around new concerns — including meeting the state’s 33% renewable portfolio standard (RPS) by 2020, meeting the mandate of the climate bill, AB 32 (see article on California’s energy future in this issue) which requires statewide greenhouse gas emissions to be reduced to 1990 levels, also by 2020, and by 80% by 2050. It is an entirely different ball game, one might say. 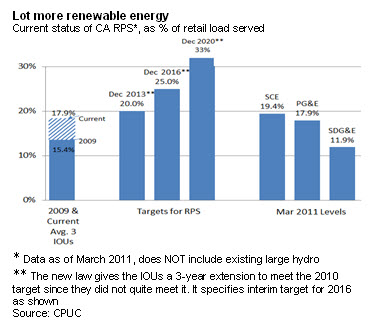 Today, CAISO is primarily concerned with maintaining grid reliability given the massive amounts of intermittent renewable generation expected over the next decade. The CPUC, for its part, is mostly concerned about managing electricity prices — which are bound to reflect higher costs associated with meeting the RPS and climate bill mandates. The California Energy Commission (CEC) is busy approving licenses for multiple utility-scale renewable energy plants. DP and CPP, while still relevant, appear to be out of synch with today’s realities. 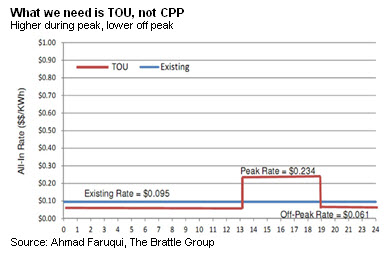 In view of these developments, in May 2011, CPUC’s division of ratepayer advocates (DRA) released a report titled Time-Variant Pricing for California’s Small Electric Consumers, examining the wisdom of introducing time-variable pricing in the current context. Prepared by Robert Levin, a senior analyst with the DRA, it is an excellent and timely read.

The report, which offers a synopsis of historical developments, points out that the idea of CPP — which is a variant of DP — “emerged in the wake of the 2001 California energy crisis when wholesale market prices were far more volatile and system reliability was at much greater risk.” The implication: neither of these conditions presently apply.

Given the state’s new priorities — namely, managing costs and encouraging continued investment in energy efficiency — time of use (TOU) rates make much more sense than CPP, DRA concludes. TOU rates, it argues, can reduce utility costs, do a better job of encouraging investment in energy efficiency and minimize greenhouse gas emissions. With ample supplies and little price volatility in the wholesale market, CPP rates are no longer as compelling as previously assumed.

“DRA recommends that most residential and small business customers transition, over time, to stable, predictable rates that vary by season and time of day,” the report concludes, adding, “… the current emphasis on defaulting smaller customers to DP programs, such as CPP and real-time pricing (RTP), is inadvisable, and that DP should be offered to smaller customers only on a voluntary “opt-in” basis as a supplement to TOU. (emphasis added)”

Putting the nail in the DP’s coffin, the DRA says, “Evidence point in this (TOU) direction as more than half of California’s large and medium commercial and industrial customers have rejected CPP in favor or TOU rates when CPP was introduced as the default rate in 2010.” This refers to the broadly held view that customers generally prefer the relative stability and predictability of TOU, as opposed to CPP. 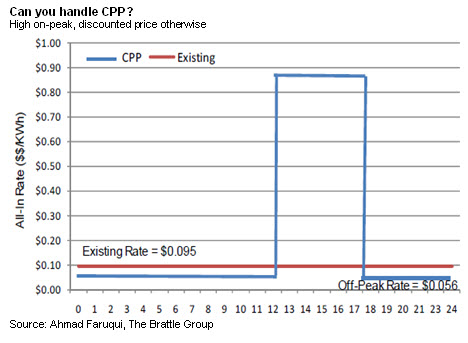 Few, of course, expected the immediate and widespread implementation of DP in California or nationwide, mostly because utility regulators, generally even more conservative than the utilities, are not ready to vouch for them, fearing consumer backlash and newspaper headlines — something few regulators relish. Moving away from flat rates — as inefficient as they may be — is a huge gamble.

As the DRA’s report suggests, TOU tariffs provide a convenient stepping stone in the right direction without upsetting too many customers. It captures many of the benefits of CPP but comes in a format, which is more familiar to retail customers, and much easier for them to adopt. 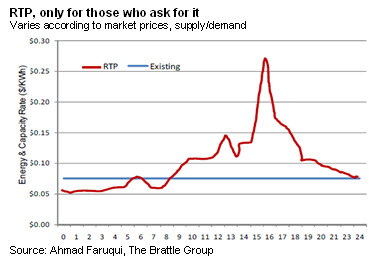 Proponents of CPP and more exotic forms of DP, such as real-time pricing (RTP), are not prohibited to push ahead. But if California regulators reject DP as the default tariff for residential and small commercial customers, it will prove difficult to make headway elsewhere across the country.

This entry was posted in Retail. Bookmark the permalink.