When It Comes To Renewables, Aim High

Researchers are pushing the envelope on renewables

This is a sample article from the November 2012 issue of EEnergy Informer.

President Obama’s latest book, no longer selling briskly, was titled “The Audacity of Hope.” A new genre of studies on the upper limits of renewables may be called “Audacity of Renewable Growth Projections.”

It all started with the publication of a report by the US Department of Energy (DOE) known as 20% wind by 2030. The pioneering study concluded that, aside from a long list of formidable obstacles — technical, economic, financial, regulatory and so on — there are no fundamental physical barriers to meeting 20% of US electricity needs by 2030 from wind alone. Most of the report, however, was focused on how one might overcome the obstacles. 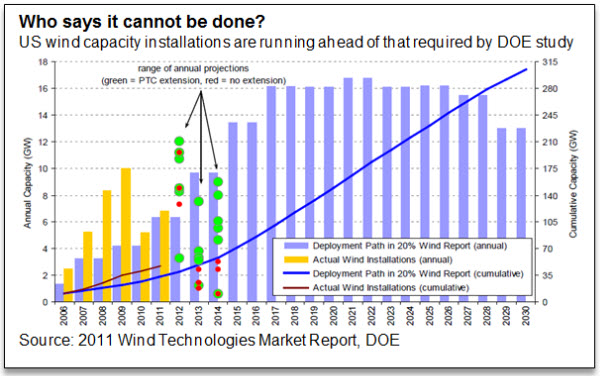 At the time of its release, the report’s results were questioned as unreasonable and/or infeasible by some critics. As it turns out, the US has in fact made more progress in installing wind capacity during the interim years than the DOE report had projected as needed to meet the target. This suggests that the 20% goal is not only reasonable but is in fact fait accompli.

To its credit, the DOE report emboldened a number of more aggressive studies, pushing the envelope to ever-higher limits and shrinking timelines. Moreover, if wind alone could provide 20% of US electricity needs, what could wind and solar combined with other renewable energy resources achieve? And if US could reach such lofty goals, why not do it on a global scale. 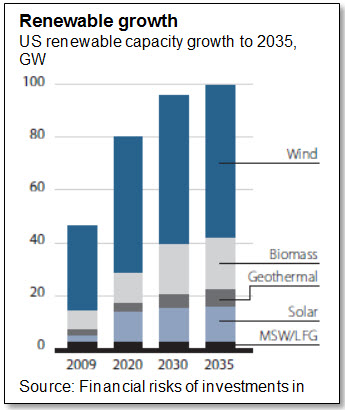 This summer, the National Renewable Energy Laboratory (NREL) released a 4-volume study that examined a scenario where renewables could meet 80% of US electricity needs by 2050. The NREL study, like that of the DOE, was mostly focused on how such a scenario could possibly take shape, what must be done to achieve it, and how would the multitude of challenges be resolved. But once again, the overwhelming message was that such an incredible feat could, at least technically, be achieved, that it was not pure fantasy.

Over time, researchers have gotten progressively bolder — more reckless and occasionally less realistic — as they keep pushing the envelope on what can be achieved with higher penetration of renewables over shrinking horizons. One recently published study (Cristina Archer and Mark Jacobson of Stanford University in Proceedings of the National Academy of Sciences) suggests that half of the global energy needs can be met with 4 million 5 MW wind turbines. It sounds easy, but it isn’t.

The confidence is growing exponentially that more can be done in shorter time if we push the limits and persevere despite higher initial costs and some well-known troubling aspects of renewables, namely their intermittency, low power density, low load factor, the need for massive amounts of backup power and transmission investments to move the power from where it can be produced to where it can be consumed.

In October 2012, it was reported that the Australian Energy Market Operator (AEMO) is studying the feasibility and cost of a scenario where the country’s entire electricity demand could be supplied by renewable energy somewhere between 2030 and 2050. For a country that has historically generated over 90% of its electricity from coal – and until recently paid little attention to its atrocious per capita carbon footprint – the mere examination of such a scenario can be considered a game changer, if not more.

The AEMO, which operates the National Electricity Market (NEM) for the Eastern part of Australia, where the bulk of the population lives, is planning to divide the habitable eastern half of the continent into 40 zones and model supply and demand on an hourly basis (map below). Extrapolations of future demand, based on historical hourly data covering 2003-11 will be used for modeling. It doesn’t much matter what the results of the study may be, the fact that such a study is being conducted speaks volumes. 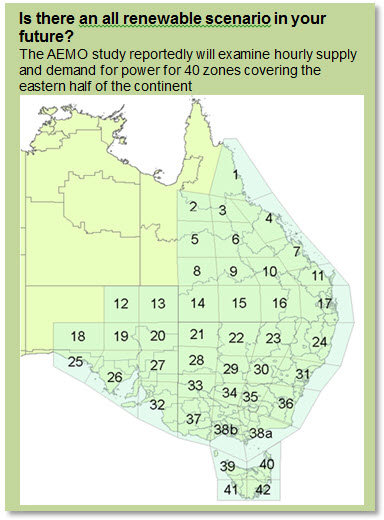 There is a logical explanation for the audacity of these ever-more ambitious renewable projection studies: The mandatory renewable targets that have already been set and appear to be within reach. California, barring a major surprise, is on track to reach 33% new renewables by 2020 — that is on top of existing or old renewables such as significant existing hydro, geothermal, biomass and other renewables that were already in place before the new requirements went into effect. California already has 16.5 GW of renewable capacity, with more expected by 2020. 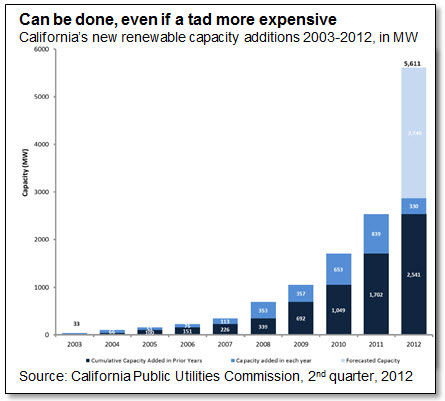 This entry was posted in Australia, Renewables. Bookmark the permalink.