This is a sample article from the October 2012 issue of EEnergy Informer.

All the talk about electric vehicles (EVs) hinges on one critical ingredient: A lightweight battery than can pack a lot of energy quickly and is capable of enduring repeated charge and discharge cycles. Battery technology, like everything else, has improved considerably over time, but today’s batteries are still far from where they need to be, especially for plug-in electric vehicles (PEV). And this, more than anything else, explains the limited commercial appeal of PEVs.

In early September, the US Dept. of Energy (DOE) and the X-Prize Foundation announced that they would offer a $1 billion prize to the inventor who develops an energy storage unit that can compete with gasoline on power density. That, of course, is an extremely tall order because among the common fuels few match the energy density of gasoline.

A gallon of gasoline (roughly 4.5 liters) weighs approximately 6 pounds (less than 3 kilos), occupies a mere 230 cubic inches but contains the equivalent of 36 kWhs of electrical energy. For better or worse, this is the energy density standard to which the driving public has gotten accustomed over the years. Anything heavier, bulkier or with less energy density would be considered inferior, hence the main obstacle to popularity of PEVs. 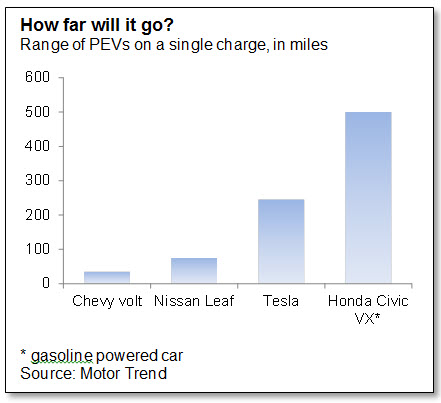 Current batteries suffer from four limitations, limited range, heavy weight, long charging time and limited charge-discharge cycles – among others. According to Motor Trend, a Chevy Volt can go approximately 35 miles on its 16-kWh battery; A Nissan Leaf about 75 miles on its 24-kWh battery and a $109,000 Tesla Roadster 245 miles when fully charged. A Honda Civic VX, by comparison, has a range exceeding 500 miles, and can be refueled in mere minutes.

Using a 208-volt charger, the Volt takes about 4 hours to fill its battery; 7.5 hours for the Leaf. On a typical household voltage levels, the charge times will be closer to 10 and 20 hours, respectively; roughly 48 hours to fully charge the Tesla’s batteries.

Which explains the PEVs limited appeal to the general public despite subsidies – currently around 20,000 units in the US annually. General Motors Co. recently suspended production of Volts due to tepid sales volume.

Toyota has come to the same conclusion, namely that it misread the market. It is apparently scrapping plans for a widespread rollout of its new all-electric battery-powered minicar, the eQ. According to Reuters, Toyota plans to sell a token 100 eQs in the US and Japan.

According to Takeshi Uchiyamada, a key figure behind Toyota’s successful Prius hybrid in the 1990s,”The current capabilities of electric vehicles do not meet society’s needs, whether it may be the distance the cars can run, or the costs, or how it takes a long time to charge.”

This entry was posted in Electric Vehicles. Bookmark the permalink.