This is a sample article from the January 2010 issue of EEnergy Informer.

Who is the lead ballerina in Dubuque, Iowa?

Retail competition was introduced in a number of states between 1998-2000 amidst great fanfare that it would lead to lower prices, improved services, proliferation of products and service innovation. Shortly afterwards, the botched up California market collapsed in 2000-2001 and with it died virtually any hope of a competitive North American retail electricity market. Only one state, Texas, opened its market to competition following the California’s electricity crisis. 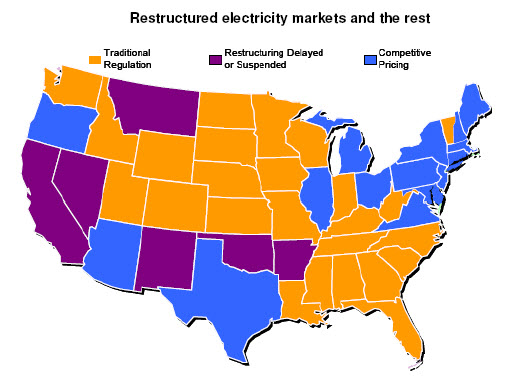 Aside from Texas and California, which represent the two ends of the spectrum, other states and a couple of provinces in Canada, have mostly had a rough time with competition. In a few cases, states that had rolled back retail rates and frozen them to begin with, experienced significant rate shocks when the frozen rates had to be unfrozen. There were political skirmishes in a few states with plenty of misinformation and confusion about how to end the rate freezes and how to allow competitive wholesale prices to be passed down to retail customers.

It has been a messy and mostly unpleasant subject. A survey of state level regulators conducted by RKS Research in 2007 revealed the level of dissatisfaction with competitive markets. Regulators in states who had not introduced competition had no interest in doing so. Those who had already done so largely wished they hadn’t. In a number of places, policymakers wanted to end competitive retail choice and reintroduce rate-of-return regulation.

Perhaps much of this regulatory backlash can be traced to unrealistic expectations by naïve policymakers who had promised miracles — such as lower retail prices — to their constituents, which poorly designed competitive markets could not possibly deliver. Moreover, rising fuel prices during this period, resulted in higher costs — unrelated to competition at the retail level.

The upshot is that the topic of retail competition attracts relatively little interest today, save a few scholars who are still wondering what went wrong, and how the state of the retail market in the US could have been different if things had been done correctly from the start with a comprehensive and workable national competitive retail policy.

Every year, Energy Retailer Research Consortium (ERRC), a group that supports retail competition, releases its Annual Baseline Assessment of Choice in Canada and the US (ABACCUS). Their 2009 report, released in December, ranks Texas as the most successful market for the third year, followed by New York and Alberta. To a cynic, it is akin to identifying the top 3 ballerinas in Dubuque, Iowa — no offense intended to Dubuque, but you get the gist of the criticism.

ABACCUS ranks markets based on a number of criteria including the status of retail market, competition at wholesale level, design of the default or standard service for customers who select not to switch and the number and ease of choosing among competing retailers in a given market (table below). 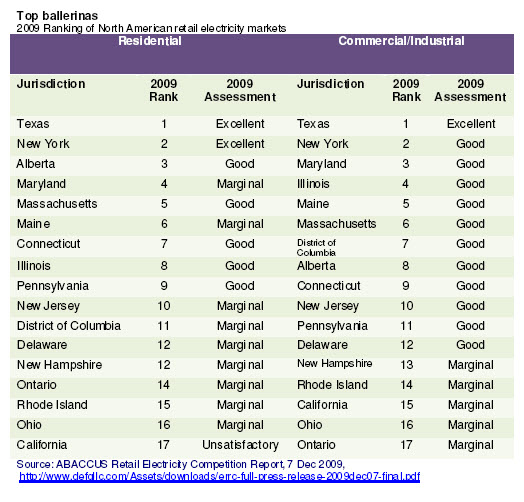 “Well-structured, competitive electricity markets are critical to meeting our country’s future electric power needs,” according to Nat Treadway, ERRC Project Manager. He points to a significant variety of products and services including the following as proof of the value of competitive retail markets despite their imperfections: hourly energy prices, indexed energy prices, multi-year contracts, green products, the bundling of maintenance services with electricity purchases, the development of on-site power generation, premium power quality services, backup power and reliability services, energy efficiency services and opportunities for customers to participate in bulk power markets.

This entry was posted in Competitive Markets, EEnergy Informer, Retail. Bookmark the permalink.