OPEC Minus The E?

If current consumption patterns persist, there will be little left to export

OPEC, as everyone knows, stands for Organization of Petroleum Exporting Countries, an oil-rich 12-member club, mostly in the Middle East and Africa plus Venezuela and Ecuador. Historically, they produced a lot and consumed relatively little — which meant that most of what they produced could be exported, hence the E in OPEC. But as their population and domestic energy consumption balloons, exacerbated by heavy subsidies (graph below), the proportion that could be exported shrinks over time. It is bad news for the affected governments, especially now that oil prices are at historical lows. 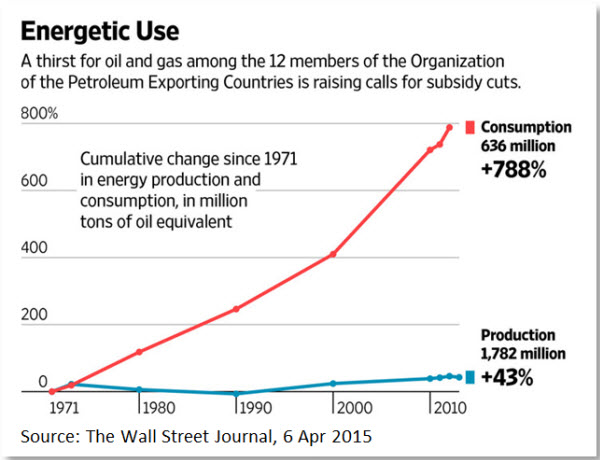 The situation is tolerable in countries where export volumes are high on a per capita basis, such as in Kuwait or the United Arab Emirates (UAE) — but not so in countries with large and growing populations, such as in Nigeria or Iran.

In a number of countries, the problem has reached a critical stage where fuel subsidies can no longer be sustained — while their removal remains politically painful if not destabilizing. As reported in a recent article in The Wall Street Journal (6 April 2015), over the past 4 decades domestic energy consumption within OPEC increased tenfold, while it doubled in the rest of the world. In Saudi Arabia, where energy is treated as a birthright and gasoline retails for 45 cents a gallon, energy consumption increased more than 60-fold over that period. 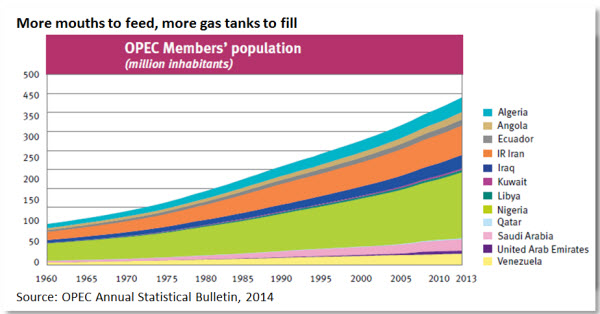 More stunning is the fact that OPEC now consumes almost as much energy as China, with less than half its population — and one might add — relatively little manufacturing or exports except for oil. According to the same WSJ article, the Middle East is expected to account for a major share of future global energy demand growth. Saudi energy use is expected to grow at an average annual rate of 3.8% through 2020, according to the International Energy Agency (IEA), well above the expected global average of 1.2% while many European countries will have virtually no energy demand growth.

Nearly all OPEC economies are facing difficult transitions, especially Saudi Arabia, where the cost of artificially low energy prices has ballooned from $5 billion in 2004 to $32 billion in 2014. According to a study by Chatham House, a London-based think tank, if current production and consumption trends continue, Saudi Arabia — currently among the world’s largest oil exporters — could become a net importer by 2038. That would certainly lead to the end of the House of Saud as we know it, if not sooner.

As time goes on — assuming a continuation of current trends — OPEC can be expected to lose its once dominant status as its production flattens out relative to total global production, as illustrated on graph below, where OPEC’s share of global oil production is shown in blue with the scale on the right hand side.

Perhaps that is among the reasons the organization did not even attempt to maintain high oil prices by cutting back production. The cartel, as all cartels, has had difficulties maintaining disciplines in times of crisis. As pressures mount on more of its members to keep their own problems under control, OPEC’s ability to set prices is likely to diminish.

The contents of this blog may be reproduced, reprinted or distributed provided full attribution to EEnergy Informer Blog #3, 13 Apr 2015 is given. If you wish to be added to our mailing list for future stories, please send e-mail to eeinformer@aol.com with your name, affiliation & e-mail.

This entry was posted in Oil. Bookmark the permalink.