Will EVs Save The Day?

This is a sample article from the September 2014 issue of EEnergy Informer.

The power sector in developed parts of the world is confronting falling customer demand due to energy efficiency gains plus the rising penetration of distributed generation, notably from rooftop solar PVs. The net impact is that customers use less while generating more — becoming prosumers in the process.

The evidence in a number of mature economies suggests that demand growth in the power sector may be a thing of the past as demand growth rates continue to shrink over time, approaching zero or even falling in a few places, as happened in Australia (graph below). 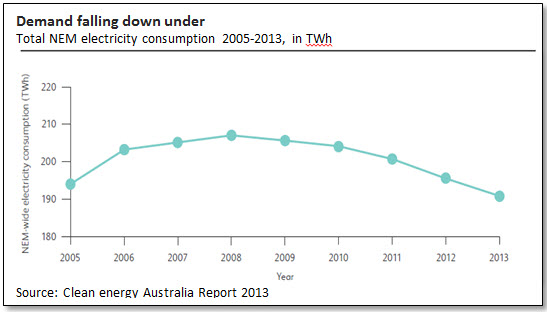 Such developments makes folks at the Edison Electric Institute (EEI), the lobbying arm of the US investor-owned electric utilities nervous, as it should. The same applies to EEI’s counterparts in Europe, Australia and elsewhere.

The last time demand growth seemed to be approaching saturation levels, air conditioning came to the industry’s rescue. Its wide-spread universal adoption over time gave the industry a big boost, necessitating massive investments in infrastructure not only to generate the energy but also meet the new peak demand created by central air conditioners everywhere.

The added air conditioning load, occasionally called the load from hell due to its extreme peakiness, were tolerated because they were accompanied by lots of kWhrs, vastly adding to the industry’s revenue base. But now in many countries, that load has approached or is approaching saturation levels. With the rising threat of self-generation, what is the industry’s next big savior?

In a recently published report EEI is urging its members to promote electric vehicles (EVs) in particular, and more broadly electrified transportation to stimulate demand for electricity — reversing trends that threaten the long-term viability of the industry.

Without such a strategy, it warns, utilities will continue to face slow growth and stagnant revenues. EEI calls electric transportation a win-win-win-win: It offers the potential to boost demand, offer incumbent players new ways to interact with customers, reduce greenhouse gas emissions while reducing operating costs of utility’s own vehicle fleets through electrification. According to the EEI report:

“The bottom line is that the electric utility industry needs the electrification of the transportation sector to remain viable and sustainable in the long term.” 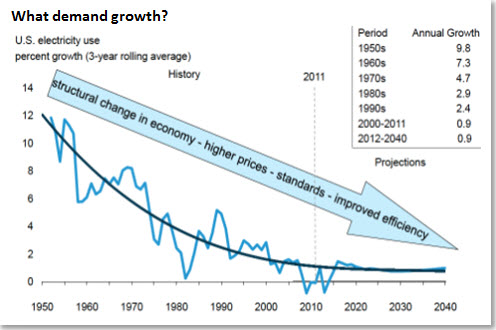 The report’s release comes against the background of two ominous and hard to ignore trends: 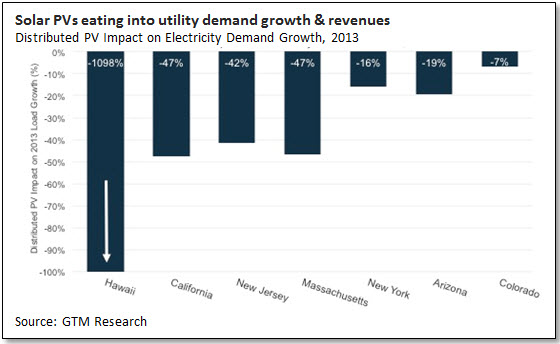 According to the EEI report,

“Stagnant growth, rising costs, and a need for even greater infrastructure investment represent major challenges to the utility industry,” adding, ”Today’s electric utilities need a new source of load growth — one that fits within the political, economic and social environment.”

While EVs do not resolve the longer-term revenue erosion problem associated with solar PVs, it lessens the pain. According to OPower, customers with EVs, on average, use nearly 60% more electricity than the average customer, while those who own both a solar PV system and an EV consume roughly the same amount of electricity supplied from the grid as an average customer (graph below). 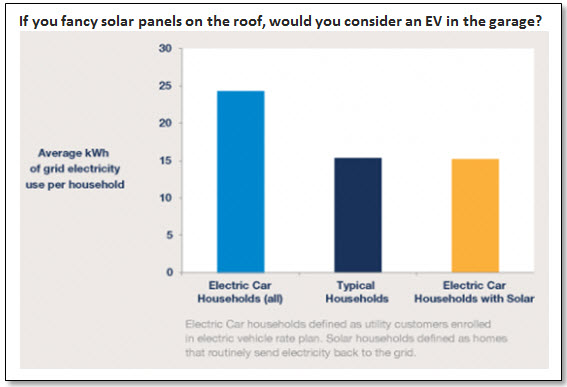 This means that encouraging solar PV customers to buy an EV will largely offset their excess solar generation — which utilities must currently buy back through net energy metering (NEM) laws, usually at prevailing retail tariffs.

It is a clever idea, especially if consumers were encouraged to buy an EV without installing solar panels. But even when they do invest in solar PVs, customers with EVs remain relatively large net users of electricity, greatly reducing the revenue erosion associated with prosumers.

EVs offer other advantages including their ability to serve as massive batteries when solar generation is at its peak, usually during sunny mid-day hours when many networks experience over-generation. This means that EVs can solve the over-generation problem while charging EV batteries with essentially free and carbon-free electricity for use at later hours, an elegant solution to so many problems. It is hard to argue against EVs even if it sounds self-serving for utility growth mongers.

This entry was posted in Electric Vehicles. Bookmark the permalink.