Doubling every year, accounting for half of US solar capacity.

This is a sample article from the May 2014 issue of EEnergy Informer.

On 8 March, a sunny Saturday, California Independent System Operator (CAISO) reported 4,093 MW of solar capacity on its network, a new record. While not impressive by German standards, it was more than double the record set in June 2013 and more than quadruple the 2012 figure. In case you are not impressed yet, CAISO estimated that 78% of the state’s 5,231 MW of installed solar capacity was producing energy. Moreover, with CAISO demand around 22.6 GW at the time, solar was roughly 18% of demand. 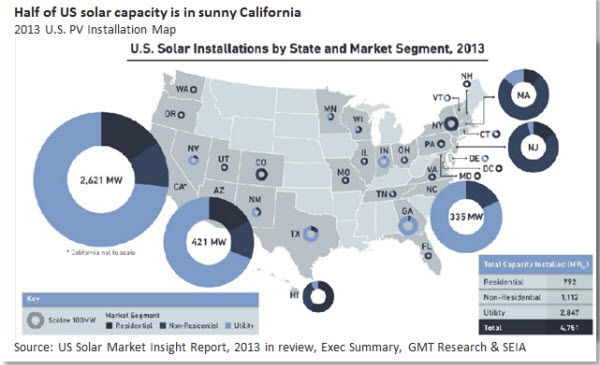 “This shows that California is making remarkable progress in not only getting new resources approved and connected to the grid, but making meaningful contributions in keeping the lights on as well,” Steve Berberich, president the CAISO, said. “The milestones illustrate that we are well into a new era when clean, renewable energy is shouldering its share of our electricity needs — and that is exciting.”

Mr. Berberich is spot on. The rapid rise of renewables, particularly solar and wind, make for an exciting life at CAISO with their hourly, daily and seasonal variations — which are mostly, but not entirely, predictable. CAISO now has 11.1 GW of wind and solar resources plus a number of other renewables — not counting hydro — totaling roughly 15 GW in its resource mix.

Moving forward, the renewable component is expected to grow, driven largely by the state’s mandatory 33% renewable portfolio standard (RPS) by 2020, and perhaps higher by 2030. 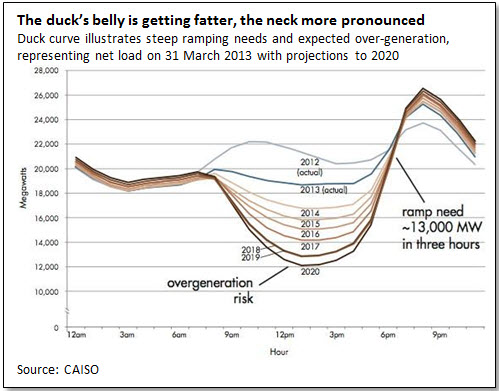 “We have seen production drops of over 300 MW in less than 30 minutes,” according to Steve Greenlee, a CAISO spokeman. By 2020, CAISO may experience the need to ramp up and down by as much as 13 GW within 3 hours as illustrated in graph above, the so-called duck curve, due to its resemblance to a duck, where the belly is getting bigger and the neck rising steeper.

If this were not exciting enough, having 15 GW of renewables on a day when peak demand may be as low as 23 GW, such as on 8 March 2014, results in low or, in some cases, negative wholesale prices. Negative wholesale prices, now routinely occurring in Germany, Texas — less so in California — means that baseload thermal generators with little operational flexibility, are willing to pay the grid operator to take their output rather than ramp up and down, which is difficult and costly for them. It also means that renewable generators are willing to pay to the grid operator not to curtail them because they may have contractual agreements or, in some cases, get credits for pumping clean electrons into the network.

As long as the frequency of these episodes is not great and the duration is short, it may be tolerable. But the experience of thermal generators in Germany in the past few years due to depressed wholesale prices have led to massive retirements of plants and write off of assets.

In case of California, CAISO is introducing an Energy Imbalance Market (EIM), in October 2014 in anticipation of a future where renewables will play an even more pronounced role in the daily operation of the network. EIM is a real-time market for last-minute balancing of supply and demand to non-ISO entities on a pay-per-use basis.

The new market is intended to expand the pool of participants who can offer to buy or sell from beyond their own balancing areas, according to CAISO. The participants need not be in California either. PacifiCorp, an Oregon-based utility, is among the first participants in the EIM. “If the sun blocks the Southern California solar facilities, utilities can tap into the EIM and buy energy from non-ISO generators,” Greenlee explained, “Or if PacifiCorp has an excess of energy, it can offer it in the EIM.”

California has been adding solar capacity at a fast clip doubling its rooftop solar installations from 1 GW in 2012 to 2 GW in 2013. To put this number in perspective, Bernadette Del Chiaro of the California Solar Energy Industries Association (CSEIA), points out that it took over 30 years to build the first 1,000 MW of rooftop solar PV in the state. 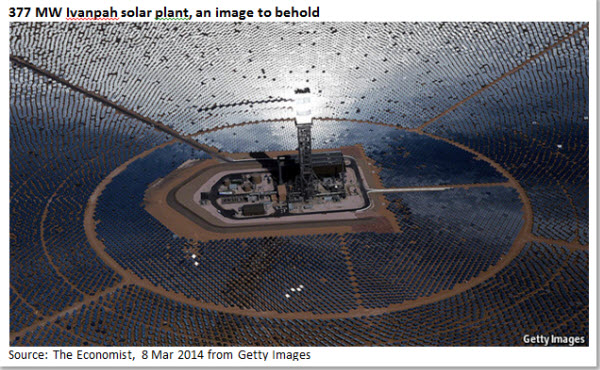 With about 5,890 MW of installed wind capacity and more expected, CAISO’s EIM is a welcomed development. 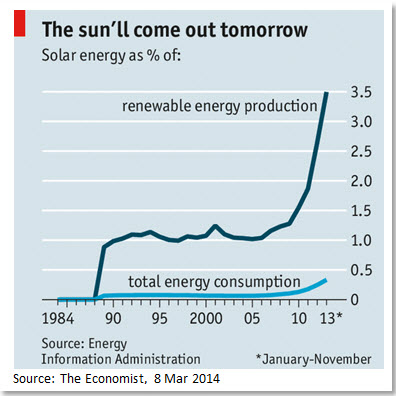 As noted by The Economist (8 Mar 2014), the US Department of Energy (DOE) wants solar to meet as much as 27% of America’s electricity from the current 1% (graph above). What we’ve seen thus far is the mere tip of the iceberg. With prices continuing to fall, DOE’s goal does not seem outlandish as suggested by the Box above.

This entry was posted in California, Solar. Bookmark the permalink.