Why Is UK Paying So Much For New Nukes?

Because nukes are expensive, lumpy and risky investments.

This is a sample article from the November 2013 issue of EEnergy Informer.

Negotiations to finalize a deal announced in late October between the UK government, Electricite de France (EDF) and Chinese investors, is like elephant sex — it takes place at high levels, and it takes a long time, to produce results.

The preliminary agreement to build 2 European Pressurized Reactors (EPRs) at Hinkley Point C at an estimated cost of $24 billion will meet roughly 7% of UK’s energy needs. The first unit is expected to go into commercial operation in 2023 if all goes according to the plan — which hardly ever happens in the real world. Nor is there much confidence that the ultimate price will have any resemblance to what is current estimate given the experience with two recent EPRs under construction in Europe.

The final cost of Finland’s single EPR at Olkiluoto, is currently set at €8.5 billion ($12.3 billion), nearly 3 times the promised price of €3 billion. EDF’s own EPR in Flamanville, Normandy, is also over budget and behind schedule. It remains to be seen what the final price tag will be.

Mindful of the challenge anyone confident — or foolish — enough to take on the job, the UK Govt. made an offer that most observers view as overly generous: a 35-year guarantee to pay £92.50/MWh, roughly $156/MWh, annually adjusted for inflation. That is roughly twice the prevailing wholesale price in the UK or Europe and substantially higher than the prevailing cost of alternative generation from other sources, including most zero-carbon renewables, which are well below $100/MWh. Moreover, while the agreed price for Hinkley Point C is expected to rise with inflation, the costs of renewables are expected to decline over time.

Needless to say, government’s announcement led to a barrage of criticism from many who fail to see the logic or the necessity of Hinkley Point C. An analysis by Deutsche Bank, for example, points out that the govt. has effectively transferred the risk of new reactors to hapless consumers who may end up paying higher electricity bills. DB said, with some justification, that the UK government is using taxpayers’ money to guarantee roughly 65% of the project cost. The remaining risks are largely assumed by Chinese investors, leaving EDF with a limited exposure of around £3.5 billion.

The question many ask is why is the UK government so keen to push the nuclear option — when private investors appear patently uninterested to build new nukes? The official line, according to Edward Davey, UK’s Secretary of State for Energy and Climate Change, goes like this:

“Today, 40% of our electricity comes from coal, 20% comes from old nuclear. Much of that is due to come offline in the next decade. We’ve seen £35 billion invested in new green energy generation since 2010. Hinkley Point C will inject another £16 billion into the economy, with the potential for British firms to get the majority of the work.”

In other words, trust us, it is good for you.

Speaking to the press, Vincent di Rivaz, CEO of EDF Energy, defended the deal, stating that is fair not only for investors but also for consumers. “The price is a price, which will be paid in 2023 when the first of our units will come into operation. It is a price for the future,” adding that the price had been negotiated through a long, sometimes tough process, to reach an acceptable agreement. According to government estimates, he said, customers could actually see their average bills lowered by £77 by 2030 as a result of the deal.

All indications are that the UK govt., frustrated in its repeated attempts to jump start its dying nuclear sector through any other means, has reached the conclusion that this may, in fact, be the best deal possible. Despite all the assurances provided, EDF was not willing to assume the substantial risks without the financial backing of Chinese investors, whose investment motives simply defy Western logic. 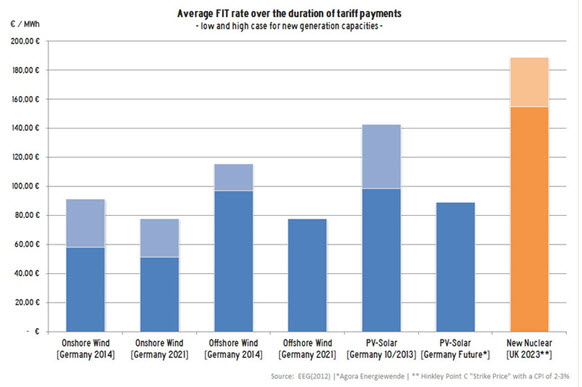 EDF, who has prior experience with Chinese investors, welcomed the deep pockets of China General Nuclear Corp. (CGN) and China National Nuclear Corp. (CNNC), who will own up to 40% of the plant. EDF has a joint venture with CGN and CNNC to build two EPR reactors in Taishan, China. The agreement is clearly “kick starting the renaissance of the nuclear power industry in the [UK],” according to di Rivaz.

Not everyone is celebrating. Writing in Renewable Energy World, Craig Morris says the price paid for the new nukes starting in 2023 — assuming the first unit is completed on time — is far above what solar and wind currently cost. He observes, correctly, that while the costs for solar and wind are likely to go down over time, the reverse is probably true for nukes. He states that even offshore wind — expensive compared to other renewables — costs £95/MWh and can be had without any indexing or loan guarantees (graph above). 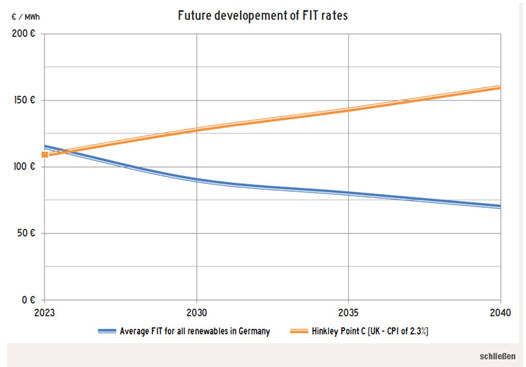 Even more damning is a comparison of the cost of Hinkley Point C to relatively high Feed-in-Tariffs prevailing in Germany (graph above). Morris claims that from the start in 2023, when Hinkley Point C reactor is expected to commence operation, it will be non-competitive with solar PVs.

To those who favor more carbon-free nuclear, the message coming from the UK must be depressing indeed.

This entry was posted in Nuclear, UK. Bookmark the permalink.