As if it had nothing better to do, The White House released a report in August 2013 warning about the vulnerability of the transmission grid and the US electricity delivery network, just as President Obama was enjoying his summer holiday. 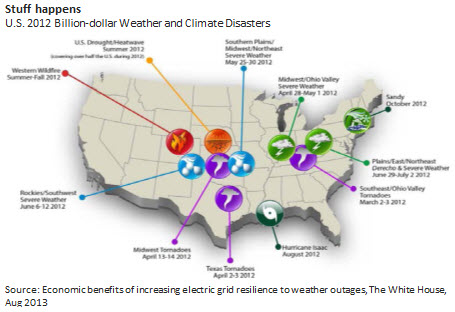 The report, written in simple language, is nevertheless focused on an issue of growing importance to the power industry, the US economy, and apparently the US president. It follows an unusually blunt report from the US Department of Energy (DOE) released in July 2013 with dire warnings that climate change will play havoc with the US energy infrastructure, including the grid. Perhaps the White House was reacting to the earlier DOE report?

The White House report points out that there have been 679 large-scale power outages in the US due to severe weather between 2003-2012. The estimated cost? It depends on who you ask, and how costs are measured, but they are significant. According to the Congressional Research Service (CRS), the cost of outages ranges between $25 to $75 billion per annum, depending on the severity of the storms, hurricanes and other weather-related disruptions (graph below). 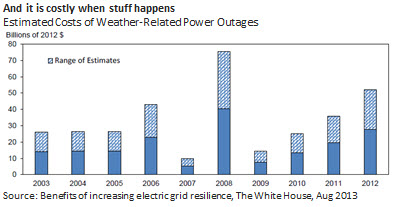 Other sources put the figure in the $18-33 billion/yr. Super-storm Sandy’s tally in 2012 is estimated in the $27-52 billion range. Whatever the numbers, they are painful. More worrisome is the fact that weather-related outages are on the rise, as shown in graph below. One can attribute this to climate change, as the July 2013 DOE report did. Clearly there are more weather-related outages in recent years. With over 450,000 miles of high voltage transmission lines in the US, the vast network is vulnerable. 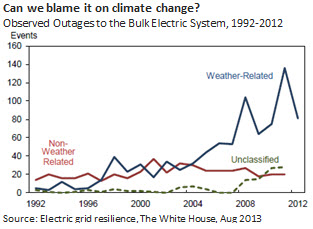 What is the cure for the growing malaise? In a report titled, A policy framework for 21st century grid released in June 2011, The White House laid out its vision of a smarter and more resilient grid. Two years on and having seen the devastation of Sandy, the White House offers 5 priorities to address the growing problem — most may be characterized as mitigation strategies, not addressing the underlying problem, which may be climate change: 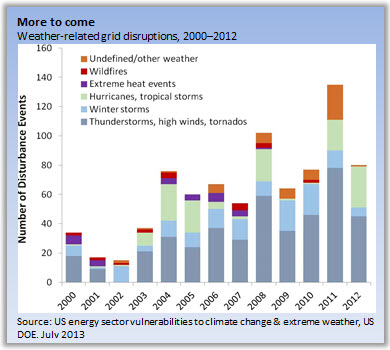 The message for the industry in the July 2013 DOE report, titled US energy sector vulnerabilities to climate change & extreme weather, and the White House report is rather clear. More severe weather patterns can be expected, the cost of outages and disruptions from the energy infrastructure are high and rising, and a lot needs to be done to address the problem, sooner, rather than later.

For the sake of climate change skeptics among our subscribers, let’s call it increased weather severity phenomenon — because it is real and not limited to the US. In mid-August, Japan, South Korea and parts of China and Europe experienced their warmest temperatures on record. Japan hit 106 degrees — the highest ever-recorded temperature in the country — and reported at least 4 heat-related deaths, South Korea hit 103 — also the highest recorded temperature measured by Korean Meteorological Association — while Shanghai hit 105, ditto, with scores of deaths attributed to the heat. Vienna and Prague also experienced record high temperatures in August 2013, never seen before. Could these record high temperatures be sheer coincidence?

This entry was posted in EEnergy Informer, Grid. Bookmark the permalink.