Today’s cheapest option may not be the best over longer term.

This is a sample article from the December 2012 issue of EEnergy Informer.

The November 2012 issue of this newsletter carried an article that alluded to the fact that current low natural gas prices in the US make nuclear energy — in fact all forms of energy — uneconomic. One of our subscribers, Robert Graber of EnergyPath Corporation, does not disagree but asks for how long will natural gas keep its current competitive advantage?

Natural gas price for December 2012 delivery on the New York Mercantile Exchange at $3.76/mmbtu is nearly $2 above its recent low of $1.98 recorded in April 2012. And many of us remember only a few years ago when it was trading at $12 and higher, which is the going price today in Japan and South Korea, if you can get it. Clearly, there is an implicit risk in assuming that the current low US prices will always remain low. 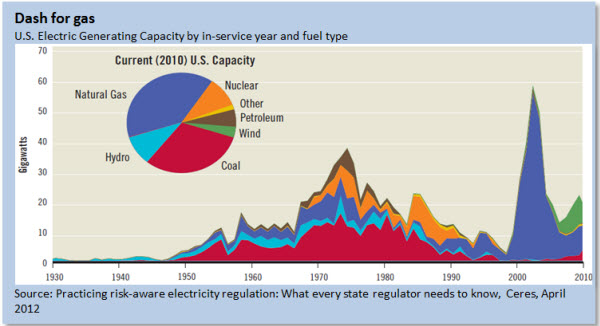 As the graph above shows, since 2000 — even before the shale gas bonanza started — US utilities have been building virtually nothing but natural gas fired plants and some renewables. Sooner or later, one would expect the impact of increased demand on prices.

Mr. Graber points out that in comparing the competitiveness of natural gas fired plants vs. nukes (graph below), one must recognize that the latter operate for 40-60 years with fuel cost 7-10 times cheaper than gas even at its current low price. And if one assumes that natural gas prices will rise over time — there are many reasons why this might happen – then the case for nuclear will become even more compelling. 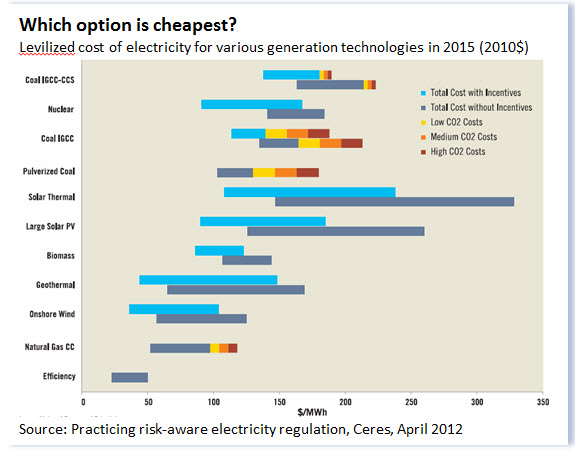 Mr. Graber, like many others, suggests that the current low price of U.S. natural gas is not sustainable because it will not support the production of the necessary quantities required for the growing demand in electricity generation and/or from increased LNG exports to Europe and Asia, where significantly higher prices could be had.

True, nuclear power suffers from uncertainties resulting from construction cost over runs, delays and their associated financing costs. But once completed, the fuel costs are trivial. Natural gas, by contrast, is fast and relatively cheap to build, but suffers from price volatility over time.

In selecting what technology/fuel combination is the best way forward, investors must balance not just the lowest cost but also the lowest risk — the basic message of Practicing risk-aware electricity regulation: What every state regulator needs to know, a report released by Ceres in April 2012 (graph below). In states where regulated rate-of-return principles still applies, the regulators must be the ultimate judge of what is best for ratepayers. 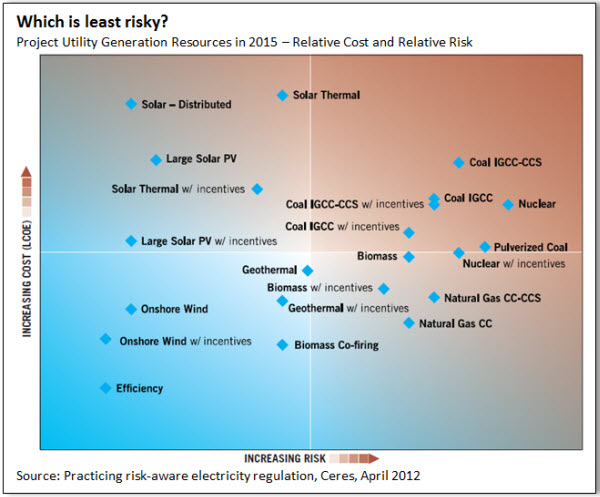 “While nuclear power is certainly challenged for its high initial cost, one thing it should not have to endure is the claim that natural gas prices are relegating this proven technology to the history’s dust bin,” Mr. Graber concludes.

This entry was posted in Natural Gas. Bookmark the permalink.