This is a sample article from the September 2012 issue of EEnergy Informer.

On 2 consecutive days at the end of July India’s power grid failed on a massive scale, by most accounts the most extensive blackout ever experienced anywhere affecting over 600 million people.

The Northern Grid, which serves more than 300 million people across 9 states, including the capital New Delhi’s modern metro, tripped around 2:30 am on July 30. Power was restored about 12 hours later, only to fail again and on a much bigger scale on the following day when the Northern, Eastern, and Northeastern grids collapsed, slashing power to more than 60% of the country’s population. 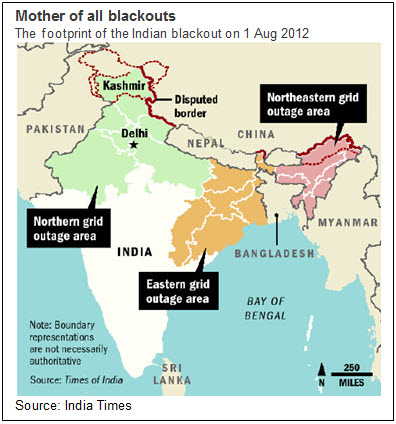 While several investigations are underway, India’s state-owned grid operator, Power Systems Operation Co. Ltd. (PoSOCO), blamed chronic over-drawing — exceeding 3,000 MW — of power by several states including Uttar Pradesh, Punjab, and Haryana, despite several warnings from PoSOCO. As electrical engineers would explain if asked, what is consumed must be matched by what is generated and fed into the network in real time. Bureaucrats can and do fudge with the numbers, but the grid cannot.

While the media was mostly focused on the negative — how such a massive failure could happen — it is amazing that the system actually manages to operate at all for the most part. It is even more amazing that the power could be restored in such a short time given the scale of the problem. India’s installed capacity falls short of demand, by as much as 12% or more, depending on who you ask. The power is routinely rationed, avoiding such a cascading collapse. Due to frequent unannounced outages, many industrial and commercial consumers have back up diesel generators or self-generate, and these do not make headlines even if inconvenient and annoying.

The lack of adequate generation capacity — more broadly infrastructure — however, takes its toll on India’s $1.7 trillion economy. The country needs to add 150-175 GW of capacity over the next decade merely to keep up with the growing demand. In contrast to China’s centralized decision making apparatus — the world’s largest democracy has a lethargic bureaucracy and suffers from an institutional culture that impedes rapid decision making and implementation.

Following the accident, Prime Minister Manmohan Singh vowed to fast-track stalled power and infrastructure projects and to introduce free market reforms. The embarrassing outage has given him the perfect excuse to march on. However, in a country where millions do not have access to electricity and millions more do not pay for the power they get, what needs to be done is easier said than done.

This entry was posted in India. Bookmark the permalink.