What Happened To Demand Growth Down Under?

This is a sample article from the April 2012 issue of EEnergy Informer.

In March 2012, the Australian Electricity Market Operator (AEMO) released a report that shows the actual electricity consumption in the Australian National Electricity Market (NEM) superimposed on a forecast of electricity demand made in August 2011. An interesting graph, reproduced below, to say the least. The question is what happened to demand, and — more important — why are the two — the actual and the forecast — so divergent and seemingly disengaged? 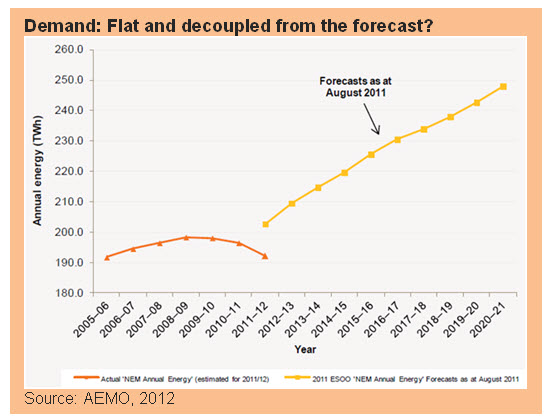 The AEMO attributed the drop-off in demand to “The changing economic landscape [i.e. structural decline of manufacturing], a more energy conscious public, the impact of rooftop solar photovoltaic installations and milder weather … all contributed to lower than forecast annual energy across Eastern and South Eastern Australia.” That may be part of the story, but one wonders if the flattening demand is a temporary phenomenon or there is more to it.

Climate Spectator, an Australian-based on-line news source, speculated on the implications of the flattening demand without addressing the underlying causes on 6 March 2012 (emphasis added):

As we see it, the flattening demand growth is an emerging reality not just in Australia but in many developed economies experiencing tepid economic and/or population growth, continued improvements in energy efficiency and robust growth in distributed generation. Distribution companies from Sydney to San Francisco are experiencing the early signs of this new trend, an important paradigm shift. 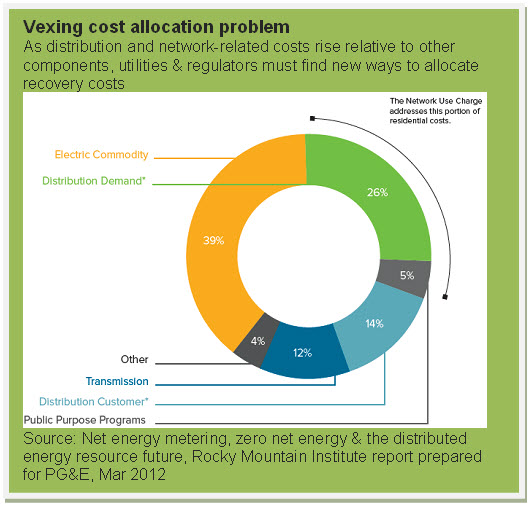 Even setting aside the current economic downturn, in some developed countries, the population is not growing as rapidly as it used to, if at all. At the same time, higher electricity prices coupled with higher appliance energy efficiency standards and building codes are beginning to lower volumetric consumption. Add the growth of rooftop PVs, solar hot water systems, ground-source heat pumps and so on, subsidized and encouraged through incentives, and the net effect is lower demand growth.

Peak demand, however, remains a problem. In fact, many distribution companies report that it is becoming more pronounced. While overall demand is flat or barely growing, peak demand continues to grow. Consumers appear to be using more of the limited kWhrs during peak demand hours when it is most expensive to supply.

It makes a nightmarish business scenario: Flat or potentially falling volumetric sales with peakier load patterns. The combination makes it more expensive to serve while putting more pressure on the transmission and distribution network. Since distribution costs are essentially flat, higher costs must be recovered from a shrinking volume of sales. This means higher tariffs, which will result in further drop in consumption. Higher rates and rising bills would also appear paradoxical to consumers since they are using less and expect to pay lower bills. Try explaining the opposite to consumers and see how far you can go.

The issue is already making headlines in Australia, and elsewhere, as distribution charges are rising at a much faster rate than generation charges. Utilities and their regulators must find new cost allocation formulas to deal with the vexing problem.

This entry was posted in Australia, Demand Forecasting, Demand Reduction. Bookmark the permalink.