This is a sample article from the December 2011 issue of EEnergy Informer.

President Obama’s decision to delay controversial pipeline pleased no one.

By some estimates, Alberta’s tar sands may contain as much hydrocarbons as Saudi oil, and at $100 per barrel, there is an attractive margin to be had by eking the tar out of the sand. For some time, that has been the official policy of the province of Alberta, endorsed by the powers to be in Ottawa.

Two minor problems, however, get in the way. First, it takes a lot of energy — mostly natural gas — and even more water to extract the heavy bitumen from the sand, even if we ignore the massive environmental costs. Second, land-locked Alberta is far from any major markets or refineries that can convert the heavy crude to something useful, such as gasoline, kerosene or diesel.

The first problem is not unique to Albertan tar sands but afflicts nearly all future sources and methods of oil extraction and production. The oil and gas business is gradually moving towards non-conventional, which generally means that it will get more energy-intensive, more expensive and more environmentally. The easy to reach oil and gas is a thing of the past.

In the case of Albertan tar sand oil, the second problem can be addressed by building massive pipelines that would transport the heavy crude to refineries in the south or ports to the west, hence the multitude of proposed pipelines shown in the map below. 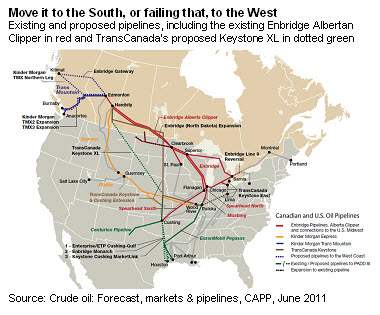 Alberta’s eyes have always been fixed on the oil-thirsty US to the south. An existing pipeline built a few years ago, already delivers tar sand oil to Chicago, Illinois.

TransCanada Corp. has proposed a second 1,700-mile pipeline, the Keystone XL, to terminate at refineries near Houston & Port Arthur on the Gulf of Mexico. Because the pipeline crosses the border, the US State Department has the final say in allowing the project to proceed, which explains why it has turned into a major political issue amidst opposing sentiments ahead of the 2012 election season.

The powerful oil lobby on both sides of the border points out that the pipeline = jobs, in both countries, and this has enormous appeal given the currently high unemployment rate in the US. For its part, the environmental community has successfully turned the pipeline into a political flashpoint, a test of President Obama’s environmental resolve — and whether he can stand up to big oil. Canada, Alberta and TransCanada have been caught in an unpleasant and unwanted cross fire.

There is little dispute that the $7 billion pipeline will create jobs. Concerns about leaks can be dismissed as trivial. And in the grand scheme of things, the pipeline is not as critical or as devastating as either side has made it. In this newsletter’s view, at its core, the issue is whether the US should tie itself to Albertan tar sand oil that is viewed as more carbon-intensive than conventional oil and comes with significant environmental side-effects. The carbon-intensity issue, of course, is debatable, since all oil, no matter how it is extracted, shipped, refined, distributed and ultimately used is carbon-intensive. 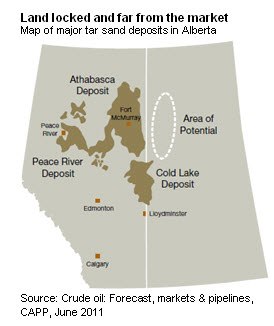 At a time when the International Energy Agency (IEA) has declared the urgency of addressing climate change, some in the environmental community believe that the US should focus on using less oil, especially carbon-loaded type of oil, by concentrating on energy conservation and renewables. The recent requirement that US cars should get a minimum of 54.5 miles to the gallon by 2025 as opposed to a meager 29 today, would save more oil than the XL pipeline can carry. Such policies deliver better value and are less damaging to the environment than shipping tar sand oil 1,700 miles to refineries.

Moreover, with plentiful and cheap domestic shale gas — to be followed by shale oil — why bother with “dirty” tar sand oil pumped to the Gulf of Mexico? Tar sand oil is an outdated format, as in the Betamax of the bygone days of video industry, for those old enough to know what we are talking about.

Be it as it may, the environmental community was pleasantly surprised to find that the Keystone XL pipeline was resonating with its constituents, turning it into a full-blown political issue. Massive demonstrations were organized, including forming a human chain around the White House to bring the message directly to President Obama, who could not avoid seeing and hearing the protesters from the oval office. Activists and well-known celebrities chained themselves to the White House fence, had to be arrested and carried away — generating free publicity for the cause. It was incredibly effective.

To nearly everyone’s surprise, in mid November, the State Department announced that a decision on the project would be “delayed” until after the 2012 election to allow “further studies.” Kerri-Ann Jones, a State Department official emphasized that, “this is not a political decision,” adding that the White House had nothing to do with it. It merely reinforced the fact that it was indeed a highly political decision and that in all likelihood it had come from the very top. How could it be any other way? (See footnote).

A day prior to the “delay” announcement, Bob McKibben, a key figure in orchestrating the anti-pipeline protests, told Financial Times (9 Nov) that “The odds are still against us, because the oil industry has more money than God, but those odds are shortening” (emphasis added). By all accounts, the oil lobby outspent the environmentalists by a wide margin, boosted by heavy-handed pressure from Canadian politicians from Alberta and Ottawa. But it was to no avail. David defeated Goliath, at least in the first round.

Canadian Prime Minister, Stephen Harper, expressed disappointment following the “delay” decision, stating that, “My view …. hasn’t changed. President Obama has to make a decision,” while reiterating his hope that the project will be decided on its merits and eventually approved. TransCanada announced that it would re-route the pipeline to avoid crossing certain sensitive areas — seemingly oblivious to the fact that the issue is not the pipeline’s route or the potential leaks. 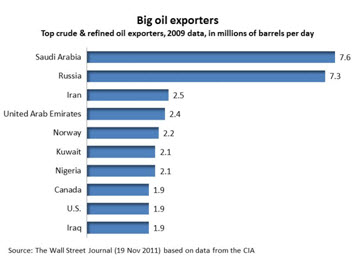 Alberta suffered another symbolic setback earlier in 2011 when the European Commission decided that under its revised fuel quality directive, the use of oil derived from tar sands should be discouraged because of its heavy carbon footprint.

EC’s decision gets messy since crude oil from various sources comes with varying amounts of carbon associated with extraction, transportation and energy used in the refining and final distribution process. How is a hapless consumer at the petrol pump to know what he or she is putting in the tank? That’s why economists favor transparent carbon taxes, avoiding EC-type decisions or the pointless debate about the TransCanada pipeline.

The reactions to the State Department’s “delay” decision were predictable. Jack Gerard, Director of the American Petroleum Institute (API), told The Wall Street Journal (11 Nov 2011) that, “This is clearly about politics and keeping a radical constituency opposed to any and all oil and gas development in the president’s camp for 2012.” Terry O’Sullivan, general president of the Laborers International Union of North America, representing the blue-collar workers, was quoted in the same article saying, “The administration chose to support environmentalists over jobs — job-killers win, American workers lose.” Susan Casey-Lefkowitz, representing the National Resources Defense Council (NRDC), praised the decision saying, “It doesn’t make sense for America to be building infrastructure for dirty oil for the next five decades.”

Albertan officials immediately began posturing that if America doesn’t want our oil, they will find other buyers in Asia. Ports in British Columbia are a fair distance away from the Albertan fields, and not everyone along the route is supportive of a pipeline crossing the beautiful Canadian Rockies to the Pacific Coast.

For President Obama, it must have been a tough decision, alienating his supporters in the environmental community or giving his Republican opponents further ammunition as a job killer. Delaying to decide one way or another, however, has made enemies on both sides and merely means that he, or his successor in the White House after the 2012 election, would have to face the very same painful issue.

Everyone knows that energy and politics have always been and will continue to be intertwined. In November 2011, the US State Department acknowledged the fact by creating the Bureau of Energy Resources within its already large bureaucracy to focus exclusively on energy.

In a recent speech announcing the creation of the new office, Secretary of State Hillary Clinton said, “You can’t talk about our economy or foreign policy without talking about energy.” With a six-fold increase in staff, Carlos Padcual will head the new bureau.

Among other things, the office will promote clean energy and support the export of US technology overseas. While it is not clear if having one more energy office in one more government agency is a step forward, it clearly acknowledges how political energy has become.

This entry was posted in Canada, Energy sources, Environment. Bookmark the permalink.