This is a sample article from the August 2011 issue of EEnergy Informer.

The world needs a lot of energy, mostly from oil, gas, and coal — oh — and some renewable resources

The year 2010 was a good year and a bad year for the company once known as British Petroleum, for a while Beyond Petroleum, and now simply BP. It was a good year because following the 2008 global recession, the demand for energy — and oil — rebounded in 2010, welcomed news if you are an oil company. It was a bad year because memories of the Deepwater Horizon accident in the Gulf of Mexico are still fresh in the public’s mind, certainly those affected by the massive oil spill.

In June, BP released the 60th edition of its annual energy data bible, Statistical Review of World Energy — a sought after report. For the first time, this year’s edition includes renewable energy statistics in the main report — a significant addition suggesting that renewable resources are now more than a blip on the energy radar screen — but barely. 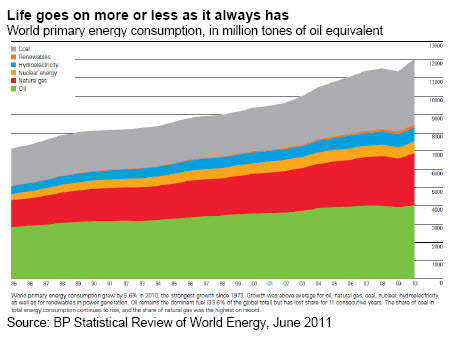 Despite all the headlines, subsidies and massive growth rates experienced over the past few years, renewable resources — excluding hydro electricity — account for a mere 1.3% or global primary energy consumption and 3.3 of global power generation. You needed a magnifying glass in 1985 to see the renewable component on the chart (see thin sliver below coal). It is now visible to the naked eye, but only if you have good eyesight. 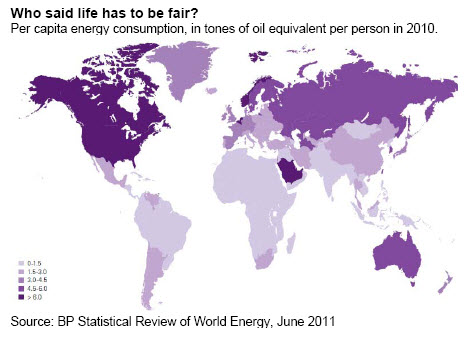 BP provides the historical data in a dispassionate fashion with little commentary. Yet the underlying message is clear. Per capita energy consumption, for example, is far from uniform, to put it mildly (see map above). Ditto for per capita emissions of greenhouse gases, for those concerned about climate change. The price of oil may be high by historical standards, but a relative bargain compared to 2008 before the global financial collapse. 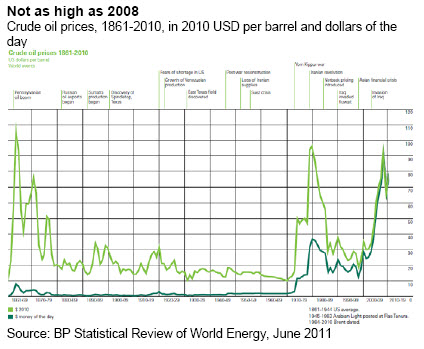 Unlike many other energy studies, BP’s report is wholly historical hence no projections of future growth or speculation about future prices.

While the bulk of the proven reserves of oil remain concentrated in the Middle East, other regions have grown in importance since 1990s. 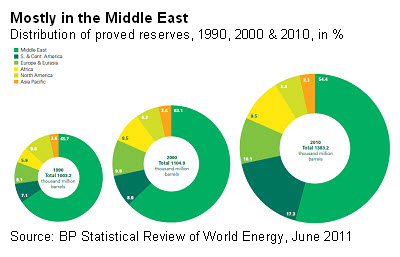 In the mean time, the global ratio of reserves-to-production has remained relatively flat, around 50% for the past 30 years, suggesting that we are not finding a lot of new reserves relative to current production levels. Many refer to this as the end of easy oil — but no need to panic yet.

Coal consumption, despite concerns about climate change, remains robust, growing 7.6% in 2010. Unlike oil and natural gas, however, coal production and consumption is rather concentrated among a few major economies shown in accompanying bar chart. 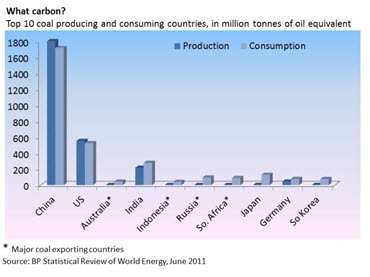