Will There Be A Show Stopper?

This is a sample article from the June 2011 issue of EEnergy Informer.

Concerns about the longer term impact of non-conventional gas begin to surface.

It happened with nuclear energy. Might it be repeated with non-conventional gas? During the dawn of civilian nuclear power in the 1950s, there were wildly optimistic expectations that atom could some day fuel virtually all of our energy needs. There was even talk that it would be “too cheap to meter.” Some say the technology was mishandled and its true potential wasted. France, for example, gets 3/4th of its electricity from nuclear power today and the reality is that the percentage could have been even higher had it not been for the Chernobyl accident 25 years ago and a few other inconvenient truths. The future of nuclear power is yet again being discussed in the aftermath of Fukushima accident in Japan.

Now, just as everyone is getting excited about the enormous potential for non-conventional gas, an article published in The New York Times in April 2011 questions the logic behind the inexorable shift to natural gas-fired generation and away from coal. It cites two new studies that suggest fugitive methane emissions from drilling and transporting natural gas may negate the presumed reduction in greenhouse gases (GHG) emitted from burning natural gas instead of coal. 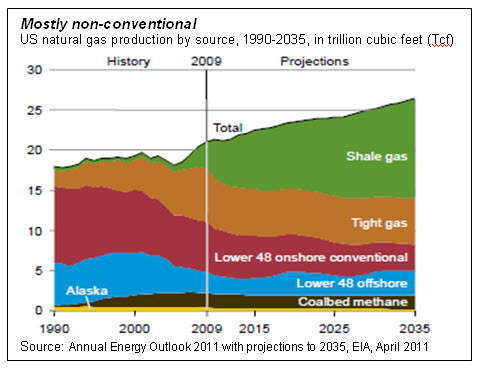 A study by Robert Howarth of Cornell University, for example, concluded that lifecycle GHG emissions associated with extraction and use of natural gas could in fact be higher than those associated with coal on a per kWh basis. This certainly is not the last one would read on the subject, but if such results are verified and duplicated by others, it would be a major setback for natural gas as a superior fuel to coal.

Among the main attractions of natural gas is that it emits half as much CO2 as coal per kWh of electricity generated. The NYT article, citing other studies, points out that non-conventional gas extraction emits considerable quantities of methane during the drilling process and from leaky pipelines. Since methane is at least 20 times more potent as a GHG than CO2, if these allegations are proven correct, it would blow a huge hole in the logic for shifting to natural gas. 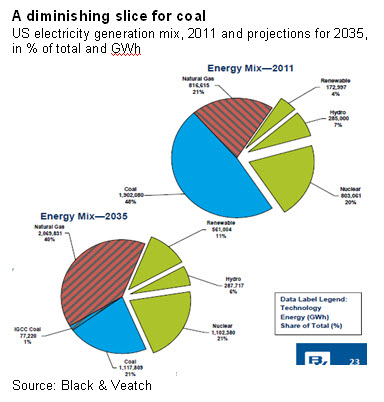 NYT, of course, is not a peer-reviewed scientific journal, but it is read by many ordinary folks, and in this sense, it has more impact than many scientific journals. The article has fueled the debate about the environmental side-effects of hydraulic fracturing, another controversial issue gaining increased attention.

Other studies of the life cycle GHG emissions from coal and gas combustion, including one by the National Energy Technology Laboratory (NETL), conclude that natural gas combustion is 50% less carbon intensive than coal. Who are we to believe?

It must be noted that all types of fuels and energy technologies come with adverse side-effects, some more unpleasant than others. The process of pumping large volumes of water mixed with fine sand particles and lubricants under pressure — known as hydraulic fracturing or fracking — used in extracting unconventional gas is no exception. The biggest concern is that the chemicals used in the process will, sooner or later, find their way into the underground water table, and into drinking water. There have been a few isolated reports of this in the US. More are likely to surface.

In January 2011, 3 members of US Congress released a highly damaging report that alleges oil and gas companies used some 750 chemicals, additives and lubricants and during pumped 32 million gallons of diesel fuel as a drilling fluid between 2005-9. Presently, non-conventional gas drilling in the US is virtually unregulated, or lightly regulated by state level environmental agencies, who are typically ill-equipped to manage the rapidly expanding sector.

The matter has prompted the US Environmental Protection Agency (EPA) to intervene as part of its mandate under the Safe Drinking Water Act, a matter thus far left to state level regulators. An embarrassed Dave McCurdy, the CEO of the American Gas Association, representing the industry, issued a statement that diesel fuel should not be added to drilling fluids. But he did not explain why so much of the stuff, and other nasty chemicals, had already been pumped in the process. Phase out one additive and something equally poisonous is likely to take its place. That much for industry self-regulation and state-level oversight.

A recent study by researchers at Duke University claims that significant quantities of methane gas appears to be seeping into drinking water wells in Pennsylvania and New York — in some case 17 times the normal levels. Methane, while not toxic, can be flammable, causing explosions if it builds up. While such results are challenged, skeptics say the time for leaving the matter to state level regulation or no regulation is over.

In May 2011, the French National Assembly voted to ban virtually all non-conventional gas drilling in the country. If approved by the Senate, France will be the first country to ban hydraulic fracturing or tightly regulate it. The move is highly symbolic since there is little activity in France thus far. But it will send a powerful message with broad implications. The Province of Quebec has also ordered a halt in all shale related drilling pending further studies. The EPA has asked the state of Pennsylvania, currently the center of shale gas boom in the US, to take a closer look at the impact of the industry on ground water resources.

Environmentalists are alarmed in Alberta, with its own booming tar sands and non-conventional shale gas. Speaking to the Wall Street Journal (10 Mar 2011), Rob Renner, Alberta’s Environmental Minister, mindful of the generated royalties and tax revenues from the industry, says the impact of tar sand production on water and air quality is “minimal.” Mike Dawson, president of Canadian Society for Unconventional Gas, could not agree more. He says, “If the well is constructed properly, then you probably won’t have any issues with the fracturing process.” He may have a point, but who is to say if the well is constructed properly? 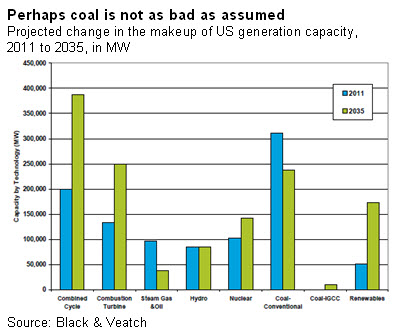 The controversy has turned into front-page news in Pennsylvania, New York, Colorado and Texas — among others in the US. Alarmed citizens are concerned and confused, not sure whose story to believe.

At a recent Bureau of Land Management (BLM) public hearing in Colorado, David Cesark, an executive from Mesa Energy Partners, a drilling company, tried to assure the public that chemicals used in the fracking process constitute 0.5% of the total fluids used. The public did not appear entirely convinced. First, they did not believe the number. Second, even a small percentage time huge volume makes a big number. Fracking, as everyone knows, uses huge volumes of water.

The matter is far from settled. And as pointed out by PennFuture (13 April 2011), coal combustion for electricity generation also has plenty of evils including an estimated 14,000-36,000 premature deaths, 23,000 nonfatal heart attacks, 21,000 cases of acute bronchitis, 240,000 cases of aggravated asthma, and 1.9 million missed work days, not to mention the considerable damage to the environment, or the poisoning of the ground and the lakes. Multiply these numbers on a global scale and the damage is even more considerable.

As David Hawkins, the director of climate programs at the Natural Resources Defense Council (NRDC) points out, “This (non-conventional gas drilling) is a huge and growing industry, and we just don’t have the information we need to make sure that this resource is being developed as cleanly as it can be.”

Does it sounds like a repeat of the nuclear industry’s “too cheap to meter” predictions?

This entry was posted in Shale gas. Bookmark the permalink.