This is a sample article from the January 2011 issue of EEnergy Informer.

Sometimes events happen so fast that even the experts are baffled by the speed of developments. Barely a decade ago, when the economy was booming, many were concerned about the rapidly dwindling US domestic natural gas supplies. There was talk of the need to build multiple liquefied natural gas (LNG) terminals to import the stuff from foreign sources, as far away as Qatar. For a while, the price of natural gas went as high as $12 per million BTUs. 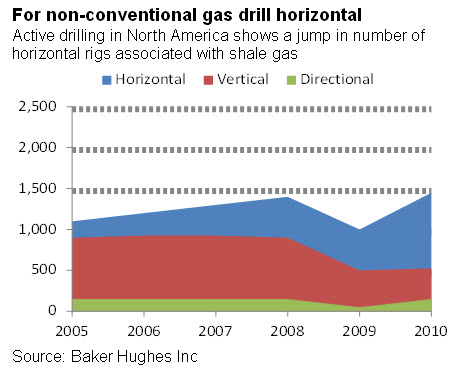 That picture has dramatically changed thanks to discoveries of non-conventional gas supplies – more plentiful than previously thought. And with stunning advancements in hydraulic fracturing technology, US Energy Information Administration has doubled its estimate of the country’s technically recoverable reserves of shale gas from 353,000 to 827,000 Billion cubic feet. How fast things change even in the slow moving energy business. 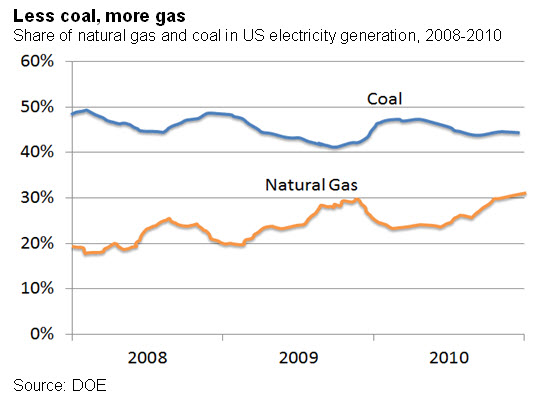 Superimposing the effect of the economic slowdown on top of this dramatic increase in supplies has resulted in a virtual collapse of prices. Natural gas currently trades at around $4.20-4.40 per million BTUs; it was as high as $9 a mere 2 years ago. The EIA now projects that prices will remain below $5 per thousand cubic feet until 2022. Futures market does not expect prices to rise above $6 per million BTUs until 2017. 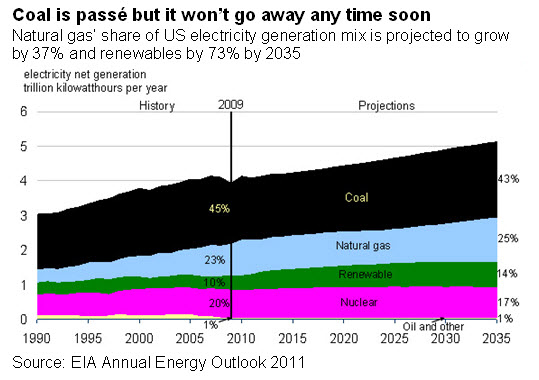 The effect of economic slump has also been surprisingly strong. In 2009, the last full year for which data is available, US burned 22.7 trillion cubic feet of natural gas – slightly less than what was consumed in 2000. The same has happened to oil consumption, now expected to remain essentially flat through 2035, according to the latest EIA estimates. Growth is passé.

The combination of flat demand and increased supplies has resulted in the “perception that the market is basically oversupplied forever,” in the words of Jen Snyder, a Principal at Wood MacKenzie, a consultancy. This, plus gradually tightening regulations imposed and proposed by the Environmental Protections Agency (EPA) is likely to result in significant retirements of old and inefficient coal-fired generation over the next decade, largely replaced by more efficient and less polluting natural gas plants, consistent with the Black & Veatch projections in the preceding article. 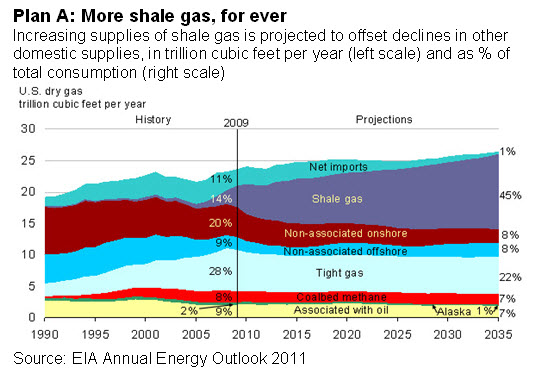 The dash-for-gas is already underway. Over the past decade some 270 GW of new gas fired plants have come on line in the US – a trend that is projected to continue. Coal, on the other hand, is projected to sit mostly on the sideline. Despite the best efforts of the powerful coal-lobby, coal’s share of US power generation has dropped from 52% in 2000 to 45% in 2009. Natural gas’ share, by contrast, has increased from 16% to 24%. Black & Veatch projects the share of natural gas to reach 40% by 2035. Coal is also passé.

The long-term implications of vast supplies of non-conventional gas at reasonable prices extending into the future – the current accepted norm or the new normal in the words of Mark Griffith, Managing Director of Black & Veatch, are profound. Investing in new nuclear reactors, for example, will be a lot less attractive at the current low natural gas prices. Likewise, renewable energy resources also look less attractive by comparison but their future growth is driven by regulatory mandates, such as renewable portfolio standards (RPS), and propelled by production tax credits (PTC), generous feed-in-tariffs (FITs) and other artificial or non-market incentives. This explains the continued growth of wind, solar and other renewable resources. EIA projects renewable resources including hydro to account for 14% of US electricity generation by 2035, consistent with Black & Veatch predictions.

More stunning is that the EIA’s most recent Annual Energy Outlook for 2011, forecasts electricity prices to fall from 9.8 cents/kWh in 2009 to 8.9 by 2016 and remain at an incredible 9.2 cents/kWh by 2035 in 2009 dollars. How often does one experience flat or falling prices for anything these days?

There are, to be sure, dangers associated with the current herd mentality where virtually everyone is assuming the same rosy scenario. If the US version of dash-for-gas continues followed by a collapse of the non-conventional gas supply, the country will be in a bind. How could such a reversal happen? There are already concerns about the effect of hydraulic fracturing on local water supplies, which the experts dismiss as trivial.

It is always prudent to have a Plan B, just in case Plan A does not work.