This is a sample article from the December 2010 issue of EEnergy Informer.

How can the massive energy infrastructure be turned around for the better?

With the usual fanfare, Paris-based International Energy Agency (IEA) released its 2010 World Energy Outlook (WEO), a flagship publication that gives a global perspective on energy prospects through 2035. And as usual, it is a good read with a compilation of facts and figures that are hard to find in a single document anywhere else. 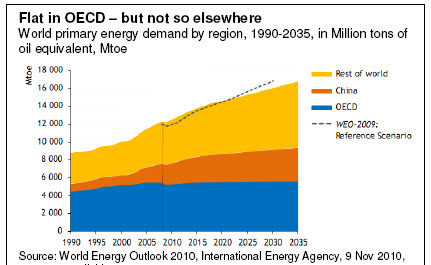 The first observation is that WEO appears to be getting longer each year, running 731 pages this year. It is anybody’s guess if there are more issues to cover, the problems are getting more complicated, or is IEA getting more verbose? The second is that the reports have been gloomy in recent years, perhaps reflecting the current financial challenges and relative lack of progress in certain key areas, notably on climate change. Third is that this year, for the first time, the IEA makes an attempt to include what might happen should the spirit of commitments made, half heartedly, at Copenhagen last December were to be carried out, half heartedly. Perhaps that is the best that can be expected given the recent setbacks on climate issues. 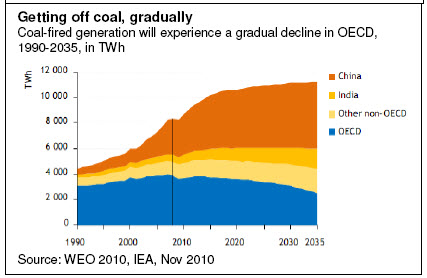 The numbers and projections, of course, do not change dramatically from year to year, giving one the same old, same old impression. The global energy infrastructure, like a super tanker, has tremendous momentum and cannot change course abruptly, yet given sufficient time, it does respond to relative fuel price changes, government policies, constraints and other obstacles. 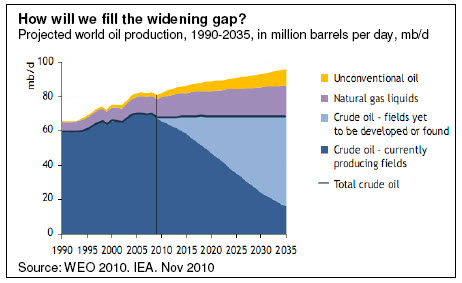 The IEA, which started as an oil monitoring and coordination body for the world’s rich countries, always makes headlines on supply and demand for oil and future oil prices. This year is no exception. Dr. Fatih Birol, IEA’s Chief Economist warned that China’s growing demand for oil could propel oil prices to $110 per barrel by 2015. We’ve been there, seen that before. So what is new?

The consistent message that comes across from this, and other projections, is that mature OECD countries, the rich part of the world, can manage on virtually no increased energy consumption in the future — that is to say they use a lot already and will need no more. The rest of the world, however, will need more energy to catch up. 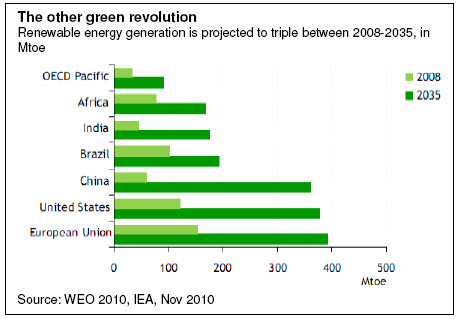 A related message, also clear from the IEA’s latest projections is the increased bifurcation of primary energy demand in OECD vs. the developing regions of the world. Going forward, for example, the former will gradually wean off dirtier fuels — such as coal — in favor of cleaner options — propelled by environmental concerns, perhaps fortified with increased concerns about climate change. 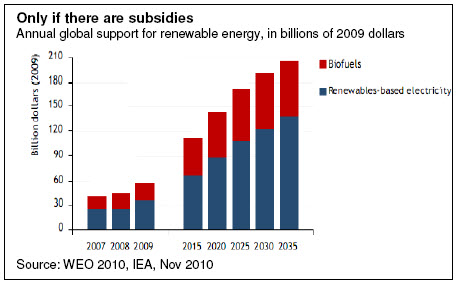 This, for example, suggests that coal will continue to be heavily utilized in many developing countries for the foreseeable future — it is relatively cheap and abundant — while its use in the US, Europe and perhaps even Australia, may be curtailed over time. In the US, for example, proposed rules by the Environmental Protection Agency — if adopted — could result in potential retirement of 46-76 GW of capacity over a decade. Even in the absence of EPA rules, the continued uncertainty about an eventual climate bill makes many US utilities reluctant to invest in additional coal-fired plants. The carbon uncertainty tends to favor the use of natural gas for the short to medium time frame.

For the oil people among our subscribers, IEA says, “oil production becomes less crude,” which is another way of saying conventional oil from existing fields will decline rather precipitously over time — hopefully new fields and unconventional oil and natural gas liquids will fill the widening gap. Call this peak oil if you wish, it is what it is, with significant implications especially for the oil-dependent transportation sector. 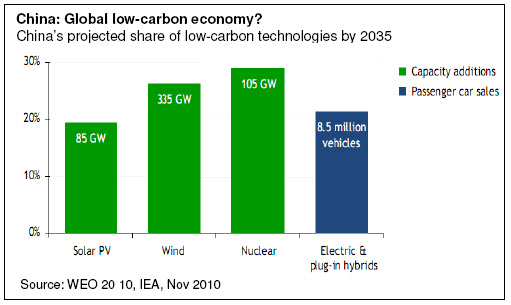 If conventional oil is on the decline, coal is too carbonintensive and nuclear is not going to be as big as once assumed, then what are we left with? Renewable energy technologies clearly have to play a bigger role. The IEA, perhaps optimistically, predicts a tripling of renewable energy generation between 2008-2035, supplying 32% of global electricity demand by 2035. Wishful thinking?

Such a feat, as the IEA is first to admit, will critically depend on the amount of subsidies and incentives offered by supportive governments around the world. According to the IEA projections, this will require annual subsidies exceeding $200 billion by 2035 from the current $57. 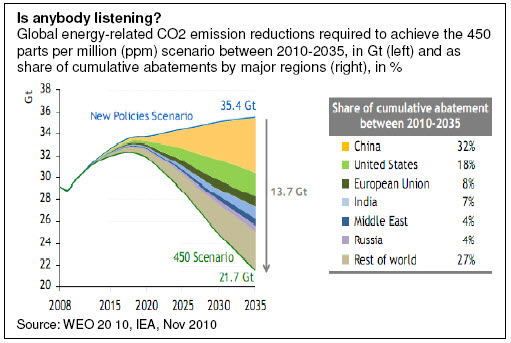 It sounds like a lot of money, but compared to the cost of a major war, Pentagon’s annual budget, or OPEC’s annual proceeds from oil exports, it is a trivial amount. It is a mere pittance compared to the $558 billion in global fossil fuel subsidies in 2008 that, surprisingly, few find objectionable (see graph below). 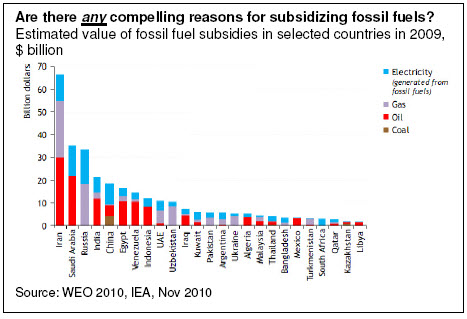 China is not only be the biggest energy user, the biggest polluter, and soon the biggest everything else — certainly before 2035 — but it will also become the global leader in low-carbon technologies, perhaps a surprising outcome given its overwhelming dependence on coal and oil. China is projected to build more nukes, install more windmills and solar PVs and have more electric and hybrid cars than anyone else by 2035, with the percentages shown on the chart on top of this page.

Climate change appears to be delegated to the back burner, perhaps not even there, and not just in the US. Yet the IEA goes through the motions to keep the topic alive as a relevant issue. It is not clear if anyone at the IEA, at the UN, or the US EPA truly believes that much concrete action will take place on this front any time soon. There are not too many in the US Congress who would wish to even discuss the topic after what happened on 2 November.

Energy efficiency, which is, of course, another major option to reduce energy consumption and greenhouse gas emissions, is not addressed in significant depth — the IEA is principally and historically focused on supply-side options, traditionally oil. On another front, the IEA has been advocating a phase-out of fossil fuel subsidies for some time. Few could disagree that the time to phase-out fossil fuel subsidies is long overdue. Even though global subsidies have dropped from $558 in 2008 to $312 in 2009; that is still a lot of subsidy.

What this newsletter finds astonishing is the fact that few seem to complain about the rampant fossil fuel subsidies while many find renewable subsides to be overly generous and/or misdirected.