US Shale gas may be a game changer, but not a substitute for climate policy.

This is a sample article from the March 2014 issue of EEnergy Informer.

Every now and then, politicians propose pet projects that may get them local votes but not much else. There have, for example, been numerous proposals to build bridges where the traffic volume would not remotely justify the investment costs. They are commonly referred to as bridges to nowhere.

In this context, many — this newsletter’s editor included — believe that the current bounty of cheap and plentiful shale gas, while certainly welcomed, is not and should not be viewed as a panacea to solve all US energy and environmental problems, because it can’t and won’t. 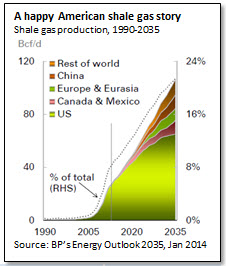 In his State of the Union address in late January 2014, President Obama, contradicted himself, perhaps unwittingly, when he reiterated his support for climate science by noting that, “The debate is settled. Climate change is a fact,” while vouching his support for increased extraction of, and reliance on, natural gas.

President Obama said, “If extracted safely, it’s the bridge fuel that can power our economy with less carbon pollution that causes climate change.” He is, of course, correct that the conversion from coal to natural gas plus the downturn in the US economy has reduced CO2 emissions from the power sector to their lowest levels since 1994. However, as noted by a posting on The Equation, the website of Union of Concerned Scientists (UCS) “Natural gas is still a fossil fuel that emits CO2 when combusted … contributing to global warming in the process.”

Following the SOU address, numerous others objected to the view that just because natural gas is cleaner than coal, it cannot serve as America’s solution to climate challenge. As observed by this newsletter in the past, if a heavy smoker decides to smoke half as many cigarettes as he used to, that would be a move in the right direction, but not a cure to his unhealthy addiction. 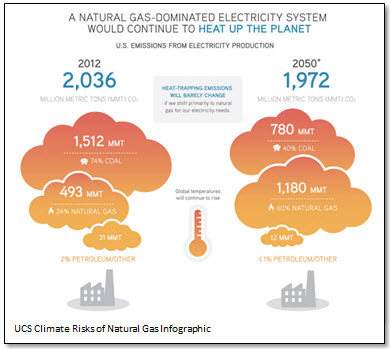 UCS posted a graph on its website (reproduced above) that speaks volumes. It shows that US greenhouse gas emissions under a scenario where US would transition to a natural gas dominated electricity future would barely change between today and 2050 “because, in addition to replacing coal, natural gas generation would grow to replace aging nuclear plants and help meet the projected growth in electricity demand.”

A number of others had a similar take on the president’s message. John Farrell, who frequently contributes to Renewable Energy World.com, for example, said, “Natural gas is not a bridge fuel, it’s a gateway drug.” In an article dated 3 Feb 2014, which was picked by other publications, he noted that, “natural gas powered electricity still pours 1.22 lbs of CO2 into the atmosphere for every kWh of electricity it produces. That’s 6 tons of CO2 per year from every household in America if its electricity were completely generated with natural gas.”

Pointing to traditional volatility of prices, which became noticeable during the recent cold spell in parts of America, many observers believe that investing in massive new natural gas infrastructure will simply bind us to the fuel.

Farrell believes that “expanding natural gas use in electricity and transportation is risky, it’s dirty, and — most of all — it’s unnecessary,” adding, “Natural gas isn’t a bridge, it’s a relapse. And it’s time we admit it.”

This entry was posted in EEnergy Informer, Environment, Natural Gas. Bookmark the permalink.